The Cost Analysis (and the Testimony of Saeed)

This morning I was feeling pretty lazy, and just not really wanting to (but knowing it’d be really good for me) crawl out from under my warm covers to go spend some one-on-one time with the Almighty.   Thankfully God loves me more than I love Him and just wouldn’t let me go back to sleep.  Hallelujah!  I’m so grateful!

I eventually rolled out from under the thick layers of blankets (3 thick blankets, to be precise), surprised at how not-freezing it was, and plopped on the couch with the best Book in all of creation.  I’m in Matthew right now.  I’ve been reading my way through it for the third time and am now around the 11th chapter, but I was in chapter 8 this morning.

As I was reading Matthew 8, there were 2 things that would not leave the forefront of my mind.  One was verse 21, where a disciple of Jesus asks Him if he can procrastinate following Him to go bury his dad.  Christ says “Follow Me, and allow the dead to bury their own dead.”  Seems a little uncompassionate at a first glance.  I’ve read it plenty of times before, but it just kinda especially stood out this morning.

A few verses later we stumble on the story of Legion, which is recorded in a number of the Gospels.  It’s this story where God liberates someone whose been possessed by numerous demons (legions of them), terrorizing the whole surrounding region, living among tombs.  And here comes Jesus, Who then sends the demons out of this guy and into a herd of pigs.  The herdsmen go “tattletale” on Jesus for liberating this man (and really, liberating all of the people that live anywhere nearby, who have been living in constant dread of this crazy demon-possessed man), but sacrificing a whole herd of swine for the job.

I really like the way the story is told in Luke 8, where it says that “The people went out to see what had happened; and they came to Jesus, and found the man from whom the demons had gone out, sitting down at the feet of Jesus, clothed and in his right mind; and they became frightened.  Those who had seen it reported to them how the man who was demon-possessed had been made well.  And all the people of the country of the Gerasenes and the surrounding district asked Him to leave them, for they were gripped with great fear.” (Luke 8:35-37).

It doesn’t make a whole hill ‘o sense that these people wanted Jesus gone.  I mean, seriously, He had just taken away their worst nightmare.  And they became terrified of Him!  But I have to wonder if it wasn’t because of His authority… and because He had already cost them a herd of swine and the herdsmen their jobs.  I have to wonder if maybe they were afraid of this Man, who if He stuck around might have the authority to rearrange things a little more, or make demands on their lives.  He might end up costing them more than just a herd of swine.

They failed to notice how great the blessing was of the deliverance of and from the demon-possessed man!  And they missed out on a magnitude of other blessings that could’ve been their’s, had they welcomed Jesus to join them.  They hung on to their comfortable numbness, their rhythm of normalcy, and refused to let Jesus shake things up… and missed gaining everything!

Perhaps this is why Jesus told the first guy not to worry about His dad’s burial, but just to follow, because He knew that following Him was sometimes costly, but always worth it, and just wanted to be upfront about that.

And it all becomes clearer when I notice that this is what folks do all the time.  Here’s Jesus, awesome, supernaturally powerful, always-loving Jesus, and folks would rather Him be gone because they’re afraid they might have to surrender, or that it might cost them something if they were to allow Him in.  So they miss the immense blessings of knowing Him.  And they settle for pond slime because it’s comfortable and familiar, when they could inherit the Kingdom of Glory!

These stories fall smack-dab in the middle of countless stories of Jesus working unbelievable miracles, healing folks from everything from epilepsy, to terminal bleeding, to leprosy, to demon-possession, to sin!  And yeah, it does cost us.  But who cares!  Because we get Jesus and He’s worth far more than anything we could possibly give up!

Now, let me tell you about the highlight of my morning.  I had just finished reading and journaling about Matthew 8 when I got a text message that was almost certainly the absolute best text message I’ve ever received in my life!  It said “Pastor Saeed has been released!”  I wept…. for 20 minutes I wept.  Okay, I pretty much bawled my eyes out, in overwhelming joy!  I danced.  I praised.  I repeatedly thanked Him.  And I cried the most glorious tears of gratitude.

Pastor Saeed is a man who loves Jesus more than life.  He knows it could cost him.  It has.  Dearly.  But he knows with all his heart that Jesus is worth it!  He has spent the past few years in a notorious Iranian prison for the criminal offense of loving Jesus!  That’s it.  The guy is an American pastor and he went to Iran to help start an orphanage.  And was thrown in prison for it, because they knew he was a believer in the Immortal God.  And many, many of us on American soil have been fighting ’til our knees and hearts throb in prayer over this particular man’s release.  And it happened… today!  I’m thrilled.  But not only am I thrilled because of his release.  I’m thrilled because of his endurance.  If you could read the words that he’s sent to his precious family (his faithful, steadfast wife and their 2 young children) during the time of his imprisonment: words of hope, encouragement.  Words that shouted from the rooftops that JESUS IS WORTH IT ALL!

So today I praise God Almighty for calling us to this radical life of surrender to an unpredictable God, Who doesn’t promise us ease and comfort… He promises us LIFE when we cast ours’ on Him.  And it may seem scary and uncomfortable at times, but He is trustworthy and wise and sovereign and He always, always loves us and cares for us better than we could care for ourselves.  And His blessings far exceed any thing it could possibly cost us.  So today, I say with my Savior “Follow Him and let the dead bury their own dead.”  Because Jesus is worth it all!  Amen. 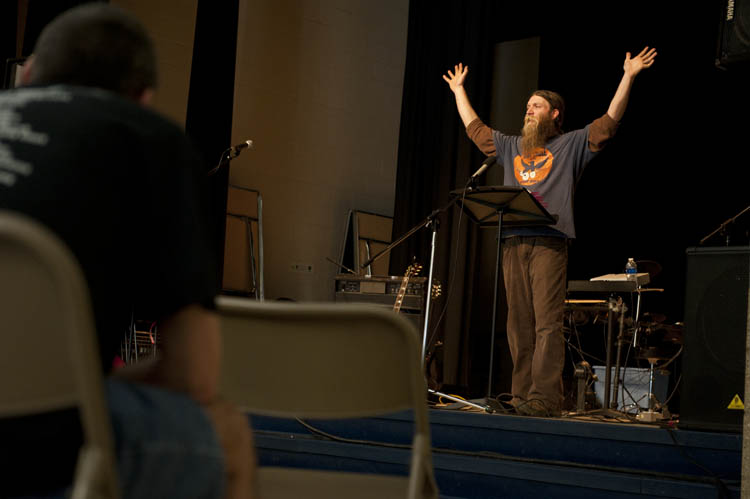