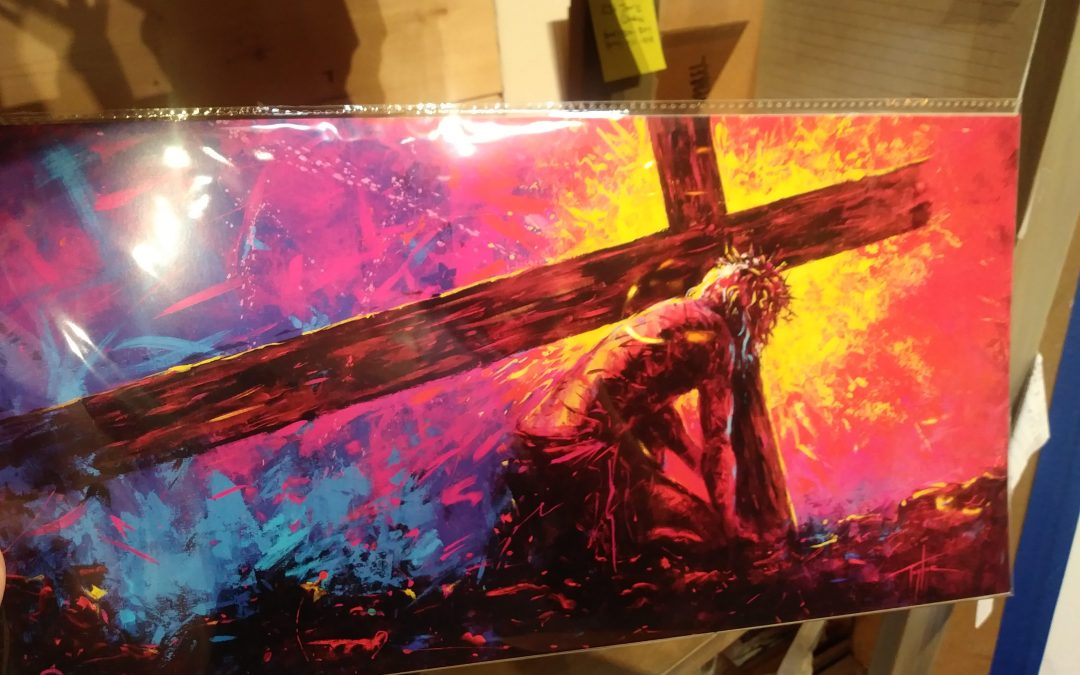 I sat at a friend’s dining room table, the sunshine pouring over my left shoulder and warming the back.  She tells me she has been studying James, specifically where He tells us to “consider it all joy… when (we) encounter various trials” because our trials produce endurance.  Then she tells me she’s been excavating the passage, like never before, by studying the Greek and such.  She discovered that the Greek word for “endurance” was “hypomone” (but with a fancy symbol over the E that I don’t know how to make happen on my English-speaking keyboard).  She told me if you break it down, hypo means “under” and meno means “remain”.  “To remain under”.

Alex tells me this truth and I am reeling backwards in my chair.  We don’t just remain under the trial… we remain under the sovereignty of God.  We remain steadfast, enduring, surrendered to whatever God has planned for our life, and receive it as if it’s good, because we know that the One from whom it comes is always good and always has our best in mind!  Suffering teaches us to surrender… If we consider it all joy.  I have seen this countless times in my own life’s trials… surrender is a learned art.

If we calculate God’s goodness and sovereignty as the common denominators in our suffering, we will be able to endure joyfully.  We will be mindful that life on earth is shorter than we realize, and life eternal is far more glorious.  But even right now, even while we’re on earth, the One who promises to work all things out for good for His people (Romans 8:1), and who never lies (Titus 1:2), actually meant ALL when He said it.  He is powerful enough and kind enough to transform the harshest anguish into the most glorious goodness of all, for those who love and follow Him.

One of the most commonly asked (and distrustful) questions is: “How can a good God allow suffering?”  The disciples in John 9:2 seemingly asked the opposite question, though I think it came from the same root.  They asked, “Rabbi, who sinned, this man or his parents, that he would be born blind?”

But Jesus always hits the tap root.  He side-steps all the wrong questions and always goes straight for the jugular of our bad theology.  He answers them, “It was neither… It was so that the works of God might be displayed in him.” (vs. 3).  Then God-in-the-flesh makes mud out of dirt and spit, anoints the man’s eyes, sends him to the pool of Siloam, to have his blindness healed.

The problem with these questions are that we try to place blame for suffering, rather than embrace it as a tool meant for good in the lives of God’s people.

The other problem is that many people hold themselves aloof from God, because of the problem of suffering.  If they would draw near, they could see it transform into something good from the hand of a merciful Creator.  They could have comfort to ease the pain.  Suffering is like childbirth.  It hurts in the process, but the end result is beautiful.

How can a good God allow suffering?  I think the disciples were a little closer to the mark.  They at least recognized that suffering is a result of the fallen state of man.  But they still thought of God as though He were out to get revenge on humanity.  He is a God of justice.  But He is not nipping at the heels of mankind seeking revenge.  He will eventually (after an intense amount of patience) avenge Himself on His foes, but the truth is, that’s part of justice.

If someone assaulted our daughters, we would hope they would spend years, if not a lifetime, in prison.  The problem with us is that we don’t realize that we are the assaulter in the story.  We are the ones who abused God.  He made a perfect garden of bliss, and we took the one food we weren’t permitted to eat and swallowed the poison.  And we do it again and again and again.  We can blame Adam and Eve, but we are deceiving ourselves to think we aren’t exactly the same way.

God stepped into humanity, and we assaulted Him.  We nailed Him to a splintery cross.  Stripped Him naked, and beat Him bloody.  Ripped out His beard and lacerated His back.  We can blame the Jewish rulers, but we are deceiving ourselves again.  We do this, again and again.  Unbelievers do this when they reject God’s merciful justice displayed at the cross.  And we, believers, do it when we aren’t grateful for whatever lot falls in our lap.  We grumble about our circumstances, and look for someone to blame (be it ourselves, our neighbors or even God).

Let’s take another look at Jesus’ answer.  He tells His disciples, this isn’t about sin and guilt, this is a peephole to Glory.  This is an opportunity for My majesty to be displayed through this man’s healing.

I could write an entire book about the magnificence of suffering in the life of believers.  I could spend pages expounding on Romans 8:28, James 1:2-3, Hebrews 12:7-11, Psalm 119:71-72, and the countless other passages that speak of God’s kindness poured out through suffering, but I will spare you the book-length blog post, and tell you that if you look up the word “suffering” in a Concordance, you will find all you could ever want to know about God’s purposes for suffering.

One of the things Jesus does, in answering the disciples this way, is He transfers their vision from earth to heaven… from this man and his parents to the glory of God.

The true question we ought to be asking ourselves, when we or others suffer, is not whether or not someone suffered to cause the pain, or whether or not God can be good and still allow it.  The real question is: How is God going to be glorified in this trial, and how am I doing at rejoicing through it?  And then nuzzle up into His lap, because sometimes the answers take awhile, and the process of character formation is hard.

The problem with us, humans, is that we always want it to be about us.  We get infuriated, and think God is unjust when our lives are less than what we want.  But the longer I walk with Jesus, the more I realize that He is worthy and I am not.  Every drip of grace is more than I deserve.  Every type of suffering is actually what I deserve.  Yet, the greater my understanding of Him grows (much of which has come through suffering and what the Bible says about it), the less I care about my circumstances, and the more I care about showing His glory and loveliness to humanity.  The more I want my life to be about Him, rather than my own enjoyment.  I will have an eternity to enjoy when I get to heaven.   In the meantime, I want to be a telescope for others to look through and see the majesty of God!