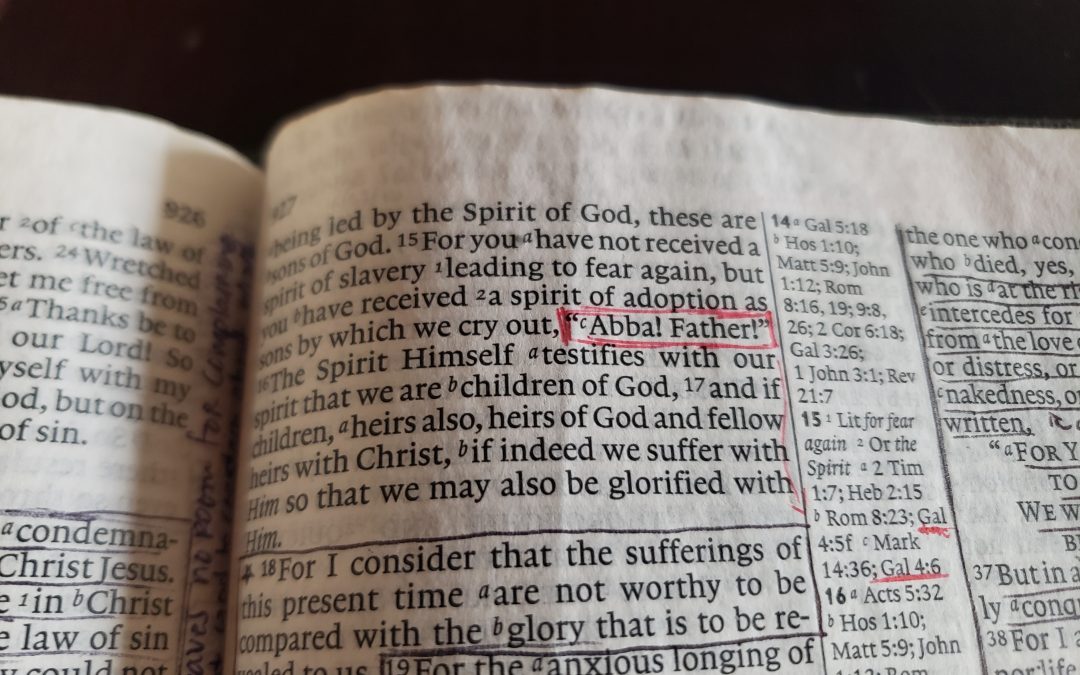 “So, then, brethren, we are under obligation, not to the flesh, to live according to the flesh- for if you are living according to the flesh you must die; but if by the Spirit you are putting to death the deeds of the body, you will live.  For all who are being led by the Spirit of God, these are the sons of God.  For you have not been given a spirit of slavery leading to fear again, but you have been given a spirit of adoption as sons by which we cry out, ‘Abba!  Father!’  The Spirit Himself testifies with our spirit that we are children of God, and if children, heirs also, heirs of God, and fellow heirs with Christ, if indeed we suffer with Him so that we may also be glorified with Him.”  (Romans 8:12-17)

It’s funny how I can look back on my life and see how foolish I once was.  (It makes me wonder how foolish I still am, and will finally see it a a decade or two from now.).  There was a time in my life when I thought obedience meant slavery.  It was part of my rejection of God.  I think a lot of people think like that.  It’s part of the reason why more people aren’t Christians.  The odd thing is, it was my disobedience that led to slavery… and subsequently fear.  I was always looking over my shoulder, wondering who could catch me for my evil deeds.  It was though there were hounds nipping at my heels, until finally they were devouring me from the inside-out.  My sin caught up with me, and made me a slave to shame, guilt, fear, self-loathing, a ruined reputation that led to more shame and defilement, addiction, and overall just a mountainous load of anguish.  All because I thought I was rebelling against God’s “overbearing rules”.

Being a mom has taught me a thing or two about my youthful, ignorant, and harmful perspective of God’s ways.  When my kids were young, I taught them “first time obedience”, because they might not have another chance.  If they didn’t stop as soon as I yelled, they might have ended up dead, depending on what it was I was trying to get them to stop doing.  They didn’t need to understand right then.  They needed to obey!  As they grew up, I found it important to trust them with information, and teach them to make wise decisions.  But I still expected that they would realize that I was their mama, and I loved them more than almost anyone ever, and I might just have some information or wisdom they lack, so even if I wasn’t yelling “STOP!”, they might just want to heed my advice.  I still hope they realize that.  I’ve got a couple of decades on them, and quite a few battle scars I hope they never have to earn, but have taught me wisdom and grace that I hope they’ve inherited.

I look at this passage in Romans and think Paul knew some of the same things I know… that when we let our fleshly (sinful) desires steer our lives, we end up in death, slavery and fear.  Yet, as I grew up, and as my kids grew up, I discovered that the remedy for all this wasn’t that I performed well enough (the first part of Romans 8, as well as the whole Gospel of grace and a cross, teach us this).  The remedy is knowing my Papa and trusting in His wisdom.  If I am open to letting His Spirit lead me through His Word, then my life will be much more fortunate.  Not only will I find life, but I will find myself full of abundant life, and joy spilling over.

I love that this passage speaks of the opposite of being enslaved as crying out to our “Abba!  Father!”  I love the word “cry” here, because it expresses either delight (a cry of exuberance) or desperation.  God welcomes both.  We can lift up our arms like a toddler running to his Daddy, like our boys used to do whenever Smiles would get home from work.  Or we can wail against His chest in frustration.  Either way, He will hold us like a kind, patient Daddy, because He is.  If He can handle the weight of the world, He can certainly handle our temper tantrums and struggles.  The key, for us, is to know God as our gracious Father.  David understood Him this way, when he penned Psalm 131 “Surely I have composed and quieted my soul like a weaned child rests against his mother.”  David, in this Psalm was realizing that He didn’t need to know all the great matters of the world, the future, etc.  He just needed to rest in God’s wisdom and ways.  I suppose I find myself in a very similar place… I don’t need to know anything beyond the goodness and nearness of God.  I can rest in Him.  I don’t even have to know why He does or doesn’t lead me a certain way, or why He says things I don’t understand in His Word.  I just have to trust that He is wiser and more loving than I could possibly fathom, and He has my best interest in mind.

Sometimes I think crying out to our Abba also means begging Him for deliverance in the midst of temptation.

It breaks my heart to look around and see how many people are demanding that God justify Himself for things they don’t like about the Bible.  Like a toddler running in the street, angry that they’re mom would try to stop them from seeking their “freedom”.  Things like sexual morality, for example.  That seems to be a big one in our culture.  We’ve slid so far off the deep end that we don’t even know which way is up.  And I’m not just talking about homosexuality (which seems to be a hot-button topic for Christians).  I’m also talking about our “hook-up culture”, where you’re mocked if you’re a virgin when you get married.  Speaking from experience, we don’t even comprehend how much of slaves we are when we live outside of God’s ways regarding our sexuality.  Most of us don’t know the contrast.  But I have been one who once was very sexually immoral, and whose purity has been restored, and I can tell you, the difference is stark.  It’s almost like living in two different universes.  I once lived in what felt like a black hole, and now I live in the light.  I once felt nothing but deadness, and now I feel vibrant with life.  It’s not just because I’m sexually pure, but it’s because of Jesus… yet because I am being led by His Spirit, it leads me deeper and higher into purity.

Not all the sin in my life was remedied the day I started following Jesus, and yet (over the past quarter-century) I find the more nearly I walk with and trust Him to guide, the more freedom I feel.  The more restful my soul.  The more alive and awake and grateful I am.  And the more I delight in my Papa.  I believe this self-sacrifice, where we lay aside the “sin which so easily entangles us” (Hebrews 12:1) is part of the suffering we are called to, as heirs of God and fellow heirs with Christ.  In Romans 8:17, He says that we are heirs “if indeed we suffer with Him so that we may also be glorified with Him.”  (It’s hard to stop this passage here, because verse 18 might be one of my favorite verses in the whole Bible, but we will get there next week).  The truth is, any sacrifice for the cause of holiness that we make on earth comes with a little bit of suffering, but also a promise of joy in heaven.  There is nothing we could cast off down here, as Christians, in pursuit of God’s pleasure in us, that won’t be rewarded, both in this life (as we loose ourselves from the bonds of slavery, fear and death), and in the next (when our joy is manifested in full!).  And just like my kids hitting the brakes when I yelled “STOP!” may have saved their lives once or twice, following the wisdom of the Bible might just save our lives.  At the very least, it will make our journey a little smoother and more enjoyable.  And we won’t always have to feel the hounds nipping our heels.