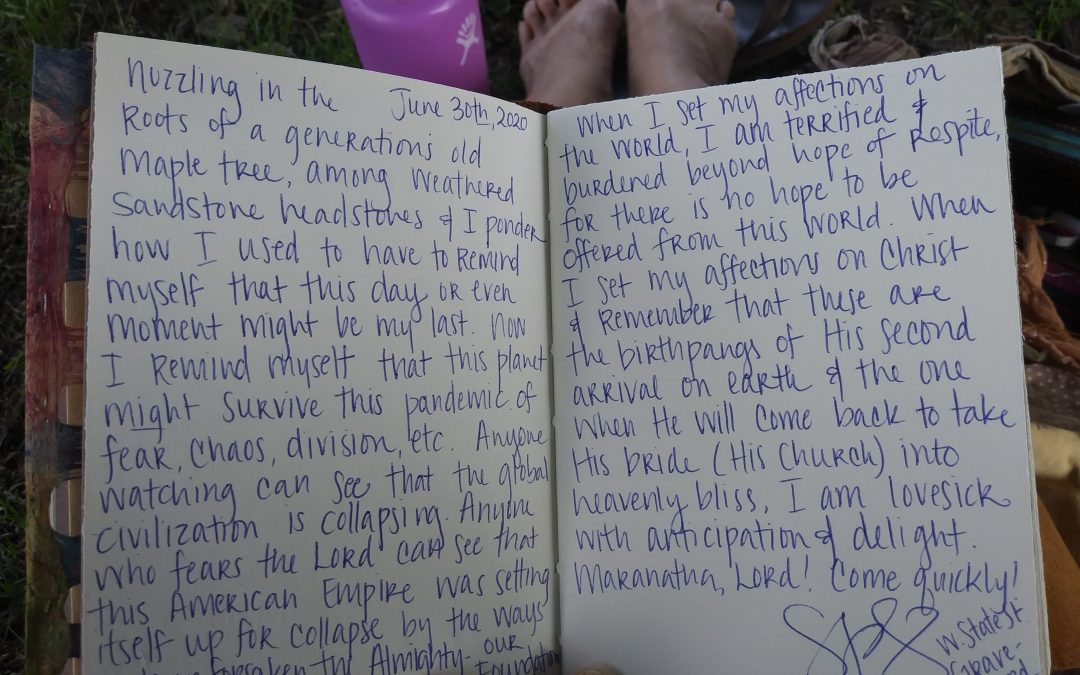 “For I consider that the sufferings of this present time are not worthy to be compared with the glory that is to be revealed to us.  For the anxious longing of the creation waits eagerly for the revealing of the sons of God.  For the creation was subjected to futility, not willingly, but because of Him who subjected it, in hope that the creation itself also will be set free from it’s slavery to corruption and into the freedom of the glory of the children of God.  For we know that the whole creation groans and suffers the pains of childbirth together until now.  And not only this, but also we ourselves, having the first fruits of the Spirit, even we ourselves groan within ourselves, waiting eagerly for our adoption as sons, the redemption of our body.  For in hope we have been saved, but hope that is seen is not hope; for who hopes for what he already sees?  But if we hope for what we do not see, with perseverance we wait eagerly for it”.
Romans 8:18-25

I stood by the dairy shelves at Kroger last Saturday, and glanced over as I saw a man, not much older than myself, groaning at the ache in his knees and probably back, as he bent low to gather something from the bottom shelf.  “Ain’t getting any easier, is it?” I empathized.  He grinned, grateful for the little bit of sympathy.

The next day, I knelt on the carpeted ground in front of Greg, while he sorted papers, asking about his in-laws.  I know his folks.  They are a sweet couple, in their 90’s, radiant if you ask me.  But I know, also, that the aging process has been harder on Meade than on Rosemary.  Greg responded with a different wording of the same story I get just about every time I ask… Meade hasn’t yet figured out that he is 96 years old, and simply can’t do the same things he could do in his 50’s and 60’s.

Greg and I continued to dialogue about our aging bodies, agreeing that, though the body is decaying, there are things that improve.  I would never trade bodies with my 20-year old self, if it meant losing the hard-won wisdom I’ve gained in the latter half of my life.  I might have had a little more challenge getting up from my kneeling position, but I probably wouldn’t have comprehended the wisdom I was to learn about growing old gracefully, from the conversations I’ve had with this dear brother, as I’ve watched him wrestle through taking care of parents who’ve aged decades most of us won’t see.

I laid in bed last night, wishing my brain would shut off.  I wish that most days as well.  Not shut off entirely, just slow down to a manageable pace.  Between ADD and Perimenopause, I am a sad case.  I looked at the clock, out of curiosity.  It was 3:45 am.  I almost got up, because I didn’t know how long it would be until I would sleep again.  Instead, I fluttered in and out of sleep, with the wildest dreams, and a nonstop parade of random thoughts racing through my brain all night.  None of them were bad thoughts… just chaotic, disconnected, keep-you-awake or wake-you-up kind-of thoughts.  Just a brain that hasn’t fully found rest in Christ, and won’t until heaven.

All of these are examples, from the past three days of my life, of watching the creation groan for new life.  I am not sure about that man in Kroger, but I know Meade, Rosemary, Greg and I are all looking forward to what lies ahead.  We know we are groaning.  But just like aging isn’t all bad, neither is the groaning.

I recall reading David’s lament about being like a deer panting for water, and thinking, “I’m not sure that’s a bad thing.”  His longing was leading him to seek out nearness with God.  We can feel so frustrated by all the ways our bodies, minds, and souls are battling through this fallen world, yet if our internal compass is set in the proper direction, our longings will lead us nearer to Him.

The beginning of this passage reminds us that the sufferings of this present time aren’t even in the same camp as the glory that is to be revealed to us.  Some of the sufferings we endure are much harder than aging bodies and wrestling brains.  I personally have been through much harder things, as I bet you have as well.  Yet, in the rearview, I realize the grace that those hard things have been to me.  Still, as my body decays, I become more and more aware that I ought to be running to God in the midst of any hard thing, small or great.  And I am keenly aware that these temporary afflictions are meant both a) to transform into my good, and b) to fill me with hope and delight in the glory of heaven awaiting me!

This passage then goes on to remind us that it isn’t even just us, as individuals, who are groaning for God’s return.  It’s all of creation.  It’s the earth and all of the damage we’ve caused and keep causing it.  It’s the wild animals suffering due to the fall of mankind.  It’s the decay of the trees, aged past their expiration date, and capsized to the forest floor.  It’s the expiration date we all carry.  As all of creation looks to the impending day of the Lord… how foolish is humanity that so many of us don’t.

But there are those of us who have learned the wisdom of longing hope.  Those of us who know these temporary trials ought to turn our hearts upward.  This passage ends with “For in hope we have been saved, but hope that is seen is not hope; for who hopes for what he already sees?  If if we hope for what we do not see, with perseverance we eagerly wait for it.”  When I think of hope, I think of a year of my life that felt like walking through the scorching flames of hell.  I have never battled the kind of intense, absolutely blinding depression I did for an entire, unyielding year.  I’m still not certain how I, or my family, survived it.

I preached this passage to myself, remembering “Hope that is seen is not hope”.  I quoted Psalm 23 to myself, day by day, “Though I walk through the Valley of the Shadow of Death”, and one day it occurred to me what a shadow actually is.  A shadow doesn’t change what’s true, only what we can see.  The sufferings of this present time, they try to blind us to the reality of God’s goodness.  They are like shadows of death.

If this is true of shadows, then the rest of the passage is what I was blinded to, and needed to believe with unseen, perseverant hope.  The first truth was that God was near so I didn’t need to fear.  I began to preach to myself, day after day, of His nearness even though it felt as though He had entirely abandoned me.  Because hope that is seen (or in my case, felt) is not hope.  I was learning true hope.  When, after a year, the Lord lifted the blindness, it became brilliantly obvious that He was nearer than I’d ever known before.  The season of suffering in my life produced intimacy with my Lord I had never had before!  It was (and still is) radiantly brilliant to me!

I believe this with all my heart: the sufferings of childbirth the entire creation is experiencing will make the unveiling of the glory of heaven and the King of that kingdom, all the sweeter.  Even the wrestling now.  If we wrestle.  So many of us cave into discouragement, when the struggles ought to make us pine for Him, like a deer panting for water.

I told you about my ADD brain in the middle of the night.  What I didn’t talk about were the sweet ways the Lord spoke to me, through His memorized Word, even in the dusting of moonlight through my bedroom window, when I turned to Him with the prayers of a beggar seeking a King.  I am fairly confident my night would have been miserable, had I not remembered to turn towards Him with my groaning.  Instead, it was sprinkled with sweetness.  Perhaps the groaning can be beneficial, and all this suffering is meant to prod us towards His abundant grace!