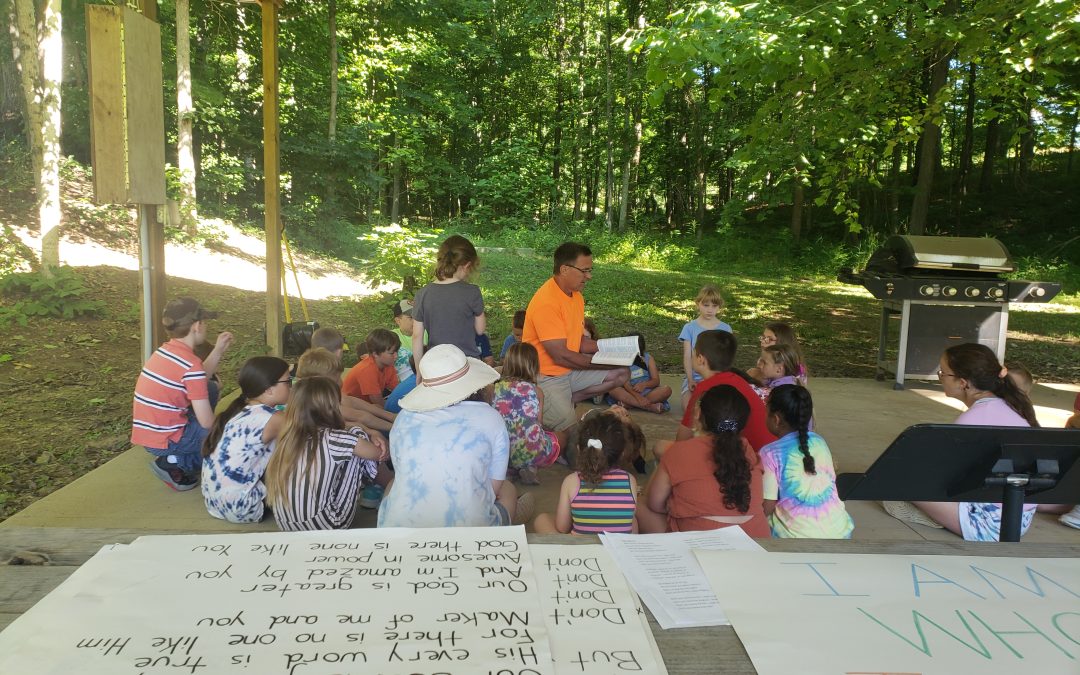 The first is that this is my pastor, and this is a perfect picture of why we love him so much.  I was just about to teach these same kids about ]Jesus doing the same thing.  He got on their level and welcomed them into His embrace.

The story is found in Mark 10.  The disciples are fielding the onslaught of space invaders, like body guards of the King.  They were permitting the infirmed to come near and turning away children.  Jesus promptly rebukes them for their oversight of these little ones whose main objective was not to be healed, but to be hugged.

I am amazed with a realization, as I am retelling this ancient story, and asking these children to be my teacher.  To show me what it looks like to become like a child.  We probed the idea that children are celebratory.  In other words, they love a good party.  We decided kids aren’t so weighed down by responsibility that they neglect the act of wonder.  They allow themselves to be distracted by pleasantries and play.  These are things I’ve pondered for decades of my life.  Children also run to their parents with their needs and hurts.  I told them I also run to my Father, and am learning how to prize the bliss of a moment over the weight of my own responsibilities.

But there was one truth I have never excavated before.  It wasn’t just that these were children.  It was that they were coming to Him for relationship, rather than to capitalize on the Healer and Miracle-worker.  They wanted to crawl into His lap and hear His blessing spoken into their ear.

This may very well be at the core of what Jesus means when He prompts us to enter the Kingdom as children.  There are all sorts of wonderful aspects of childlikeness.  But at the center, they come to their parents, as we ought to come to our God, out of love and desire for His Presence.

The other thing I want to tell you about this picture is that a couple of times during this engaging conversation I heard Monte (my pastor) gently ask them not to draw in the dirt because “You can’t listen and draw at the same time”.  My mind immediately went to the public trial of the woman caught in adultery.  If you don’t recall the story, here’s what happens.  The Pharisees drag her from her bed of shame, naked, into the public square, to accuse her before Jesus.  Jesus leans down and begins writing in the dirt.  Every Christian whose ever read this story has wondered what He was writing.  The Bible doesn’t tell us.  But maybe that’s the point.  We aren’t supposed to know.  We’re supposed to see what He’s doing.  He’s communicating that He isn’t listening to them.  He refuses to participate in her public shaming.

This is how it is with us, Church.  There is an accuser, always on the prowl, always looking to catch us in sin.  But Jesus, the Lord of all, refuses to listen to Him.  He has cleansed us of all unrighteousness through the cross and resurrection.  We are free of the condemnation we justly deserve.  Jesus is too busy writing in the dirt, and rising to make eye contact with us.  He says the same to us, as He did to her, “Neither do I condemn you.  Go and sin no more.”  He wants us to be free of both sin and shame.  The accusers voice is drowned out by the love of the Messiah, Who squatted down to earth to show us His affection and grace.